#ThanksMichelleObama: Students use social media to voice their unhappiness with revamped school lunches

School kids around the country are tweeting pictures of their unappetizing school lunches and blaming the most prominent advocate for healthier school meals for their "bowls of mush and mystery proteins," Roberto A. Ferdman reports for The Washington Post.

The tweets use the hashtag #ThanksMichelleObama, which dates back to 2012. They were "being sent out at a rate of 40 per minute last week, but started to gain momentum some 10 days back," Ferdman writes.

The tweets and pictures vary, with some presenting a "mealy substance" or mystery food that is supposed to pass for the entree while others poke fun at how pitiful the presentation is. 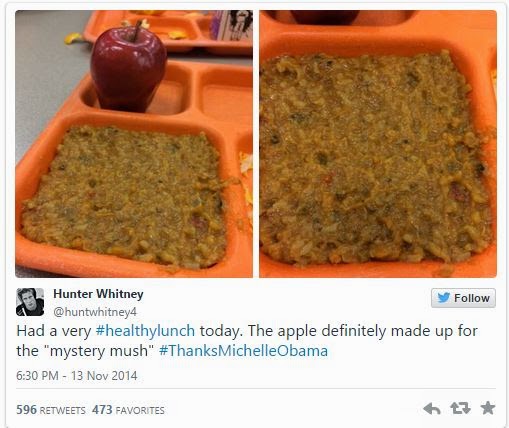 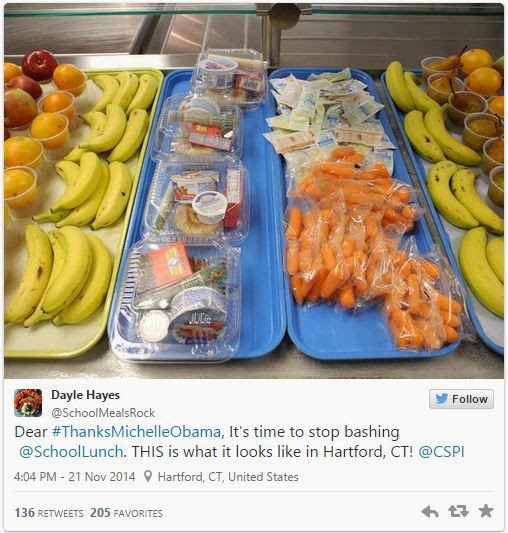 "We've seen the photos being tweeted," said Sam Kass, executive director of Let's Move!, the organization Obama founded to fight childhood obesity. "But we don't dictate the food that schools serve—school districts do." He added, "We’ve seen thousands of examples of healthy, delicious school lunches that meet the new standards being made across the country by talented school chefs."

Obama has been a key player in the implementation of the new health standards in schools, which mandate an increase in fruits, vegetables and whole grains and place restrictions on calories,sodium, sugar and fat served in a school day. These restrictions were also added to snacks and beverages this year.

Several studies have reported great success with these new requirements. In Virginia, a recent study found that school lunches were "significantly healthier" than home packed lunches and a study in Massachusetts concluded the same thing.

But others say that this healthy food is not being eaten, but instead thrown away. A Harvard School of Public Health study in Massachusetts supports this conclusion, finding that "some 60 percent of vegetables and 40 percent of fresh fruit are thrown away (for good measure, even more vegetables—some 75 percent—were thrown out before the USDA school meal standards went into effect)," Ferdman reports.

Complaining about cafeteria food in certainly not a new phenomena, what is new is that "everyone has a camera on their phone and a public platform to share pictures," Ferdman writes.
Posted by Anonymous at 11:15 AM
Email ThisBlogThis!Share to TwitterShare to FacebookShare to Pinterest
Labels: child obesity, childhood obesity, children, nutrition, school lunch, youth
Newer Post Older Post Home