Doctors' offices full; many patients worry their common cold is one of the serious illnesses recently reported in the news

Doctor's offices are busier than usual this time of year not only because it's cold and flu season, but also because of an increased worry patients have that they might have one of the  more serious illnesses reported in the news like enterovirus D68 or Ebola, Elizabeth Renter reports for Fox News.

Dr. Sameer Maroof, a family physician at Doctors Express in Cary, N.C., told Renter that his office "had seen increase in the number of patients battling cold-like symptoms," and that some were"concerned that it could be a serious illness, such as the respiratory condition enterovirus D68."

So, what are the chances they have a serious illness? Most Americans get the common cold two or three times a year, Renter reports. While enterovirus D68, a respiratory virus with symptoms that range from mild to severe, has infected a little over 1,000 people since mid-August, with the number of infections expected to decline throughout the fall, according to the Centers for Disease Control and Prevention. 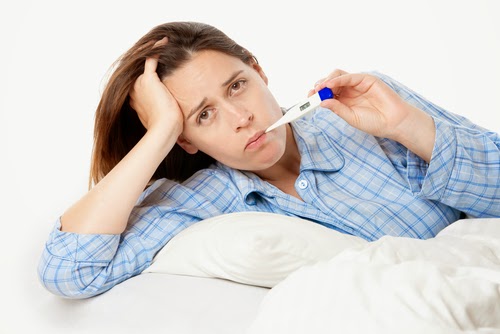 The problem is that these illnesses are closely related and have similar symptoms: runny nose, body aches, cough and respiratory problems. The flu also shares these symptoms, but add chills, fever and sore throat, Renter writes.

As for the flu, 5 to 20 percent of Americans get the seasonal flu each year, according to the CDC, but unlike the cold and enterovirus D68, the flu can be avoided because there is a flu vaccination available.

And the likelihood that you have Ebola is virtually nonexistent. The CDC has confirmed three cases of Ebola in the U.S. and you must have direct contact with the body fluid of someone with Ebola to contract it. The virus can cause diarrhea, vomiting, heavy perspiration and unexplained bruising.

So, if you have the symptoms of the common cold, it is likely you have the common cold, Renter writes. She said it's time to see the doctor if:
1. You are wheezing or having difficulty breathing.
2. You are part of an at-risk population like smokers or those with compromised immune systems.
3. You have persistent vomiting.
4. You have children with severe allergies or asthma.
5. You have symptoms lasting more than seven days.

"If patients are unsure whether their illness warrants a doctor’s visit, they should err on the side of caution," Maroof told Renter.
Posted by Anonymous at 8:21 PM
Email ThisBlogThis!Share to TwitterShare to FacebookShare to Pinterest
Labels: colds, flu, virus
Newer Post Older Post Home