Preschoolers and kindergartners at three Virginia schools tend to eat healthier when they eat school lunches compared to lunches packed at home, Roberto A. Ferdman reports for The Washington Post. 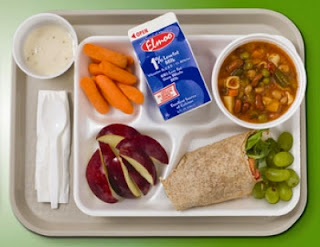 Researchers at Virginia Tech surveyed more than 1,300 lunches at three schools in Virginia, and found that parents often packed chips, sweets and sugary drinks. These items are not allowed under the recently revised National School Lunch Program.

"I wasn't expecting there to be such a strong difference between school meals and lunches packed by parents," rsearcher Alisha Farris told Ferdman. "We thought that parents would send lunches that reinforced the sort of healthy habits we hope they are trying to establish at home."

"More than 60 percent of meals packed at home had one dessert (nearly 20 percent had two or more); just under 60 percent had savory snacks, like chips; and roughly 40 percent had a soda or sugar-added juice," Ferdman reports. "The school meals were more likely to contain fruits, vegetables, naturally sweetened juices and milk."

While the sample is not nationally representative, the study says there is no reason to believe the problem is limited to public preschools and kindergartens in Virginia, Ferdman writes. A similar study in Massachusetts this year found a similar pattern for its elementary-school students.

Stricter nutritional guidelines might explain why packed lunches perform so poorly by comparison from a nutritional standpoint, Ferdman reports.

Children get between a third and one half of their daily calories, on average, while they are at school, Ferdman writes. And this study shows that the 60 percent of children who eat school lunch, appear to be getting more nutritional meals.