In an effort to combat the country's obesity epidemic, the Food and Drug Administration issued final regulations Tuesday that will require chains with 20 or more restaurants, movie theaters and pizza parlors to post calorie counts on menus.

"The rules will have broad implications for public health," Sabrina Tavernise and Stephanie Strom report for The New York Times. "As much as a third of the calories that Americans consume come from outside the home, and many health experts believe that increasingly large portion sizes and unhealthy ingredients have been significant contributors to obesity in the United States."

“This is one of the most important public health nutrition policies ever to be passed nationally,” Margo Wootan, director of nutrition policy at the Center for Science in the Public Interest, told the authors. “Right now, you are totally guessing at what you are getting. This rule will change that.”

The numbers "could be a pretty big wake-up call," writes Jason Millman of The Washington Post. "The FDA rules are more comprehensive than expected, given the strong industry pushback since the menu labeling provision was included in the 2010 health-care law." The FDA proposed a rule in 2011, but heavy lobbying has delayed its finalization. 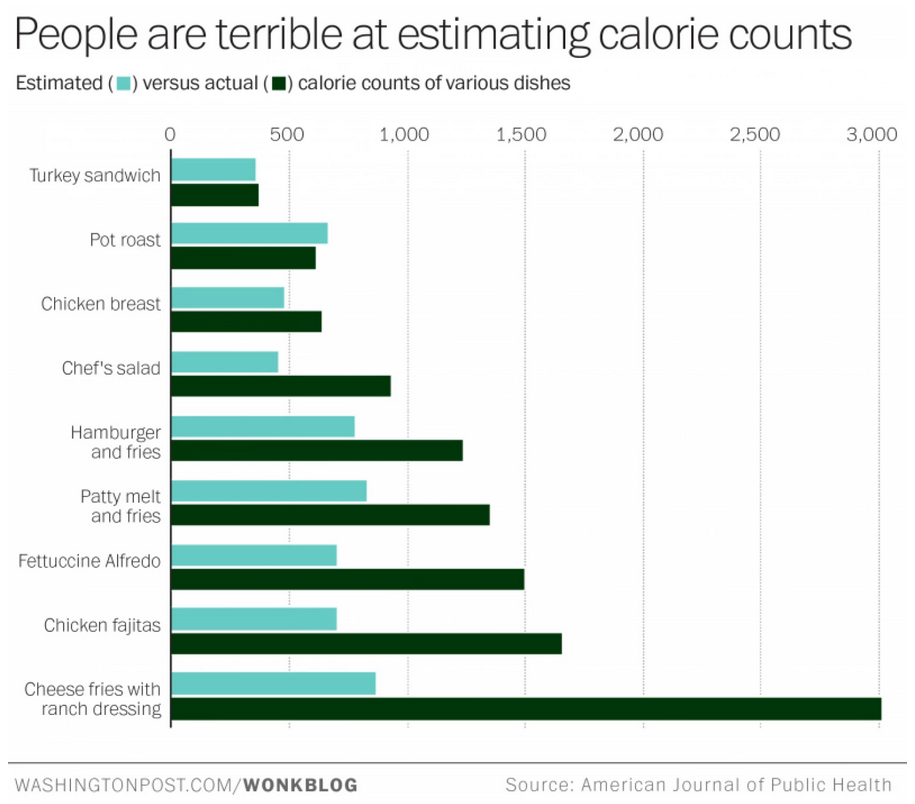 "Do people eat healthier when they can see calorie counts?" Milliman asks. "The evidence so far seems mixed. The impact seems to be greater when the calorie count is much higher than what consumers expect. What does seem clear from past studies is that people really are terrible judges of how many calories they consume when they dine out [and] are especially bad judges of the calorie content of the least healthy foods commonly found of restaurant menus."

The rules also cover food in vending machines, amusement parks, alcohol if it is on the menu or a menu board, and some prepared foods in supermarkets. Chain restaurants are defined as food establishments with 20 or more outlets.

The policy will take effect a year from now, "and seems likely to face legal and political challenges from some parts of the food industry, including grocery and convenience stores that sell prepared foods for takeout," the Times reports.

The National Grocers Association told the paper, “Grocery stores are not chain restaurants, which is why Congress did not initially include them in the law. We are disappointed that the FDA's final rules will capture grocery stores, and impose such a large and costly regulatory burden on our members.”

Daren Bakst, a research fellow in agricultural policy at the conservative Heritage Foundation, told the authors that the FDA interpreted the law too broadly. “If Congress wanted to cover any establishment that sells prepared foods, they would have said that,” he said. “No reasonable person is about to confuse a grocery store, convenience store or movie theater with a restaurant.” But retiring Democratic Sen. Tom Harkin of Iowa, who helped create the labeling requirement, said the rule “closely mirrors congressional intent.”

The FDA offered some concessions to grocers, convenience stores, pizza chains and vending-machine owners. For example, pizzerias can define their serving sizes and list calories by the slice, and vending machine owners have been given an extra year to comply.