Depression should not be a taboo subject; rural Kentucky news editor details writes about her victory over it

By Tim Mandell
Institute for Rural Journalism and Community Issues

Depression is a subject people often shy away from discussing, but a large percentage of Americans suffer from, or have suffered from, serious depression. Around 50 million have become seriously depressed at some point during their lives, according to a report by the University of Kentucky Cooperative Extension Service. ­

The suicide last month of actor Robin Williams brought depression to the forefront of the national news for a few weeks, but as the national focus shifted to other stories, community journalists should continue to talk about depression, especially in rural areas where people might feel they will be ostracized if they express how they feel. 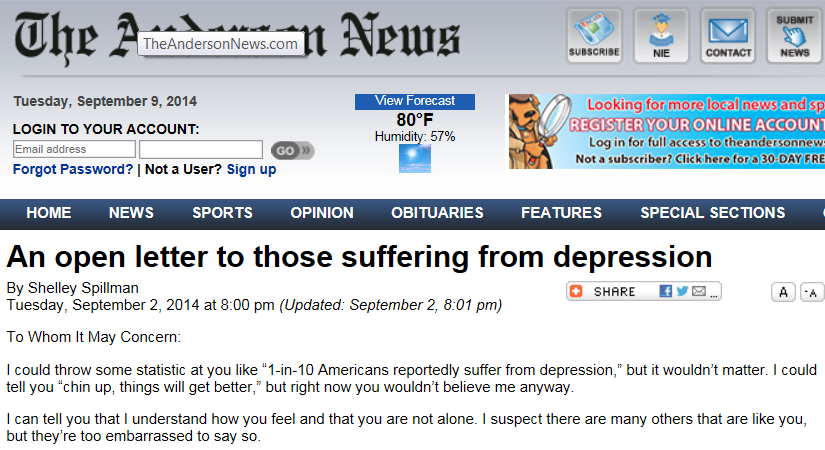 That’s why it’s important when journalists like Shelley Spillman, news editor of The Anderson News in Lawrenceburg, Ky., step forward and write columns detailing their own battles with depression. Spillman, who was inspired to write a column after Williams’ death and the suicide of a local man who suffered from depression, said in an interview, “This is not something we normally talk about and maybe we should. Maybe these people wouldn’t feel so alone."

"As journalists we’re part of the community too," she said. "I really enjoy people getting to know me, my real struggles in life and the things I’ve been through. It’s amazing how relating to people on a human to human level is one of the most difficult things to do. But it’s so important.”
In her column, Spillman wrote: “I, too, have suffered from the cold, metallic grip of depression. I know what it’s like to be in a room full of people and still feel alone. You’d give anything to feel the warmth of company without having to go through the mental gymnastics of plastering on a fake smile just so you don’t have to be berated with ‘are you OK?’ or ‘what’s wrong?’ It’s not their fault. Most people don’t know how to deal with people who suffer from depression. Even in our daily interactions people stop and ask ‘How are you doing?’ without sticking around long enough to hear anything other than a one-word utterance of ‘Fine.’”
“It does get better; give it time. I understand, though, that giving depression time, when a day with it can feel like carrying around the weight of a giant boulder, seems impossible, but you can. Sometimes when I think about my time with depression it seems so far away, like I’m at the fair soaring on one of those giant swings, examining bad memories of someone else’s life. I can feel black fog of depression permeating in my brain, trying to find a way back in, but I immediately recognize the intruder and sent it packing. Like I said, it’s a parasite, it’s always looking for a host to attach to.”
Spillman added, “You’ll find that you are a lot stronger than you may even realize now. You can make it out of this, and one day the clouds will part and you’ll be able to see the sun again. Let me tell you the sun feels glorious on your skin after a longtime in the dark.”
Spillman told The Rural Blog: “Readers who have called appreciate my honesty in my columns. It’s hard to put yourself out there and be that vulnerable, but I like for my columns to be honest and real. It’s a way for people to know who I am.” She said that writing a column like this is “a good way to get the ball rolling to get people talking about (depression).” She said she hopes columns like this can lead to there being more resources for people with depression, especially in small communities, and lead to depression being a subject that’s less taboo to discuss. (The Anderson News is behind a paywall but can be reached by clicking here.)