The percentage of adults under the age of 65 who do not have health insurance decreased by double digits in approximately half of Kentucky's counties, says Enroll America, which released county-level data showing who the Patient Protection and Affordable Care Act has helped most, Kevin Quealy and Margot Sanger-Katz report for The New York Times. "In 2013, the uninsured rate was 19.4 percent, but this year it has fallen to 10.8 percent."

For an interactive county-level map click here; below is a screenshot of the map, showing one Kentucky example and the stark difference in states that expanded Medicaid and those that did not. 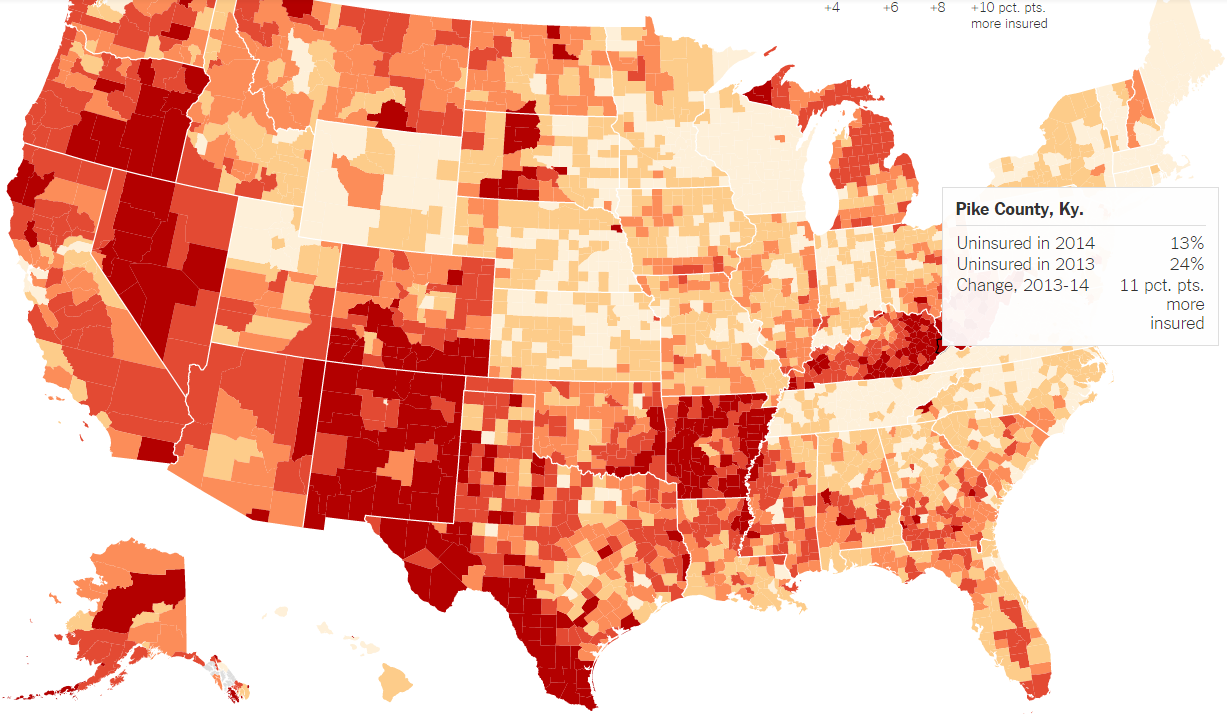 "The areas with the largest increases in the health insurance rate, for example, include rural Arkansas and Nevada; southern Texas; large swaths of New Mexico, Kentucky and West Virginia; and much of inland California and Oregon," Quealy and Sanger-Katz write. "Each of these trends is going in the opposite direction of larger economic patterns. Young people have fared substantially worse in the job market than older people in recent years. Blacks and Hispanics have fared worse than whites and Asians. Rural areas have fallen further behind larger metropolitan areas."
About 10 million Americans who had no insurance in 2013 signed up for Obamacare this year, and the national uninsured rate for adults under 65 dropped from 16 percent to 11 percent, Quealy and Sanger-Katz write.
"People with the lowest incomes tended to benefit the most from the law," Quealy and Sanger-Katz write. In states such as Kentucky "that expanded Medicaid, low-income people can get insurance without having to pay a premium. And for middle-income people who qualify for tax credits to help them buy insurance, the subsidies are most generous for those lowest on the income scale. Poorer people were always the least likely to have insurance because their jobs rarely offered it and private premiums were often unaffordable." (Read more) Here's an enlargement of a section of the above map, focusing on Kentucky: