News media blamed for most of Ebola scare; experts continue to say that risk of infection is low

The reaction of many Americas regarding the Ebola virus has gone beyond what is medically necessary, but is a natural reaction to fear, Maggie Fox reports for NBC News.

Medical experts told Fox that while the federal Centers for Disease Control and state health departments are taking appropriate measures to keep an eye on people who were in direct contact with Ebola patients, some actions "may be excessive," such as Cleveland-area schools closing after a middle-school worker "traveled home from Dallas on Frontier Airlines Tuesday on a different flight, but perhaps the same aircraft" as the Ebola-infected nurse, Fox reports.

“They are taking drastic steps for a risk that is rather remote,” said George Kapalka, professor of psychological counseling at Monmouth University in New Jersey.

Blame for this fear is placed on the news media and politicians, Fox reports. Media are “undoubtedly complicit in stoking this fear, not by covering the story — that’s fine,” risk perception expert David Ropeik told Fox. “They are complicit by burying all the qualifiers about how minimal the risk is.”

So how risky is Ebola?

“The only individuals potentially at risk for Ebola in the United States right now are those who have traveled to affected areas of West Africa or who have been directly involved in treating cases of Ebola or close contacts to a symptomatic patient with Ebola," Stephanie Mayfield, Kentucky's public health commissioner, said in a press release.

Mafudia Suaray, a family physician at Rutgers Robert Wood Johnson Medical School, says the risk of getting Ebola in the U.S. is "very low." She explains that "Ebola is a virus that is spread from person to person through contact with bodily fluids, including saliva, tears, sweat, urine, blood, stool and semen. It is not spread through the air. ... The virus cannot be spread through contact with intact skin and a person must have symptoms of the disease to spread it to others."
Adam Cole of NPR created a visual to show how unlikely an Ebola infection is, based on the reproduction number of the virus, which indicates how many people one person might infect. It says that for every person who has Ebola will infect two others, but direct contact with a bodily fluid is required. 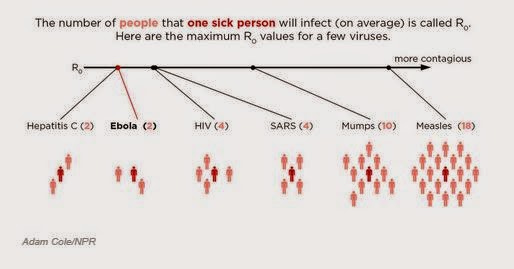 And the reason that officials, including the CDC Director Thomas Frieden, think Ebola will be contained in the U.S. is because our public health system is good and Ebola isn't contagious until symptoms are present, allowing time to isolate those who have come in contact with anyone who has been infected, and thus stopping the spread of the disease, Michaeleen Doucleff reports for NPR.

Suaray reminds us in the release that "common sense prevention measures should always be the priority, whether for Ebola or for more common illnesses such as the cold and flu." Wash your hands, stay home if you have fever, see a health care provider if your fever is high, cover your face with your arm or a tissue when you cough or sneeze and talk to your doctor if you plan on traveling to an infected region.
Posted by Anonymous at 8:27 PM
Email ThisBlogThis!Share to TwitterShare to FacebookShare to Pinterest
Labels: infections, public health
Newer Post Older Post Home