Kentucky ranks fifth in obesity and its high-schoolers rank first

Obesity and health problems go hand in hand, and Kentuckians are known for both.

Kentucky now has the fifth highest adult obesity rate in the nation, up from ninth last year, and Kentucky's high-school students are the nation's most obese, according to a report by the Trust for America's Health and the Robert Wood Johnson Foundation. 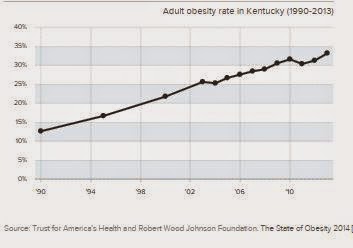 At least one out of every three adults in Kentucky is considered obese (33.2 percent). This rate keeps going up; significantly higher than the 25.3 percent rate in 2004 or the 12.7 percent rate in 1990.

Baby boomers are the heaviest adults, with 37.1 percent of them considered obese. The report also found that 42 percent of black adults, 24.5 percent of Latino adults and 31 percent of white adults are obese.

Kentucky is joined by 20 other states with obesity rates of at least 30 percent. In 1980, no state was above 15 percent, according to the report, but times have changed. West Virginia and Mississippi tied for the highest rates of adult obesity at 35.1 percent and Colorado has the lowest rate at 21.3 percent, well above that long ago 15 percent. 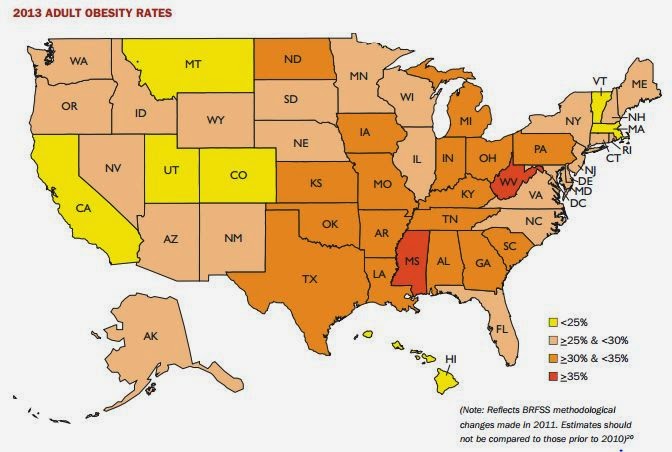 Not only are the adults in Kentucky obese, so are its children, and kids who are heavy, tend to remain heavy as adults.

Kentucky's high schoolers have the worst obesity rate in the nation at 18 percent. The national average, according to the Youth Risk Behavior Surveillance System, is 13.7 percent. Utah has the fewest obese kids with only 6.4 percent of its high schoolers considered obese. 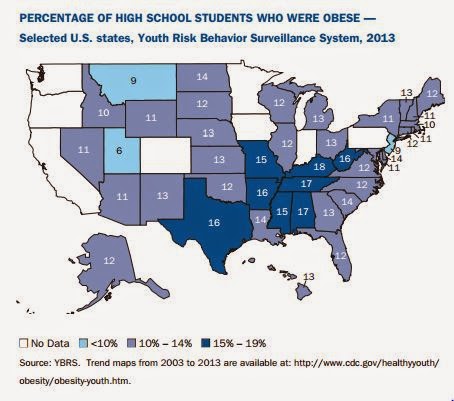 Obesity rates among 10-to 17-year-olds in Kentucky is also high, ranking 8th with 19.7 percent considered obese. Mississippi ranks highest in this category at 21.7 percent. Obesity rates among Kentucky's 2-to 4-year-olds from low-income families also fall in the top ten of most obese, ranking sixth with a rate of 15.5 percent.

Why does it matter? Obesity takes a huge toll on health, particularly with diabetes, high blood pressure, heart disease, arthritis and certain cancers. Kentucky struggles with each of these diseases.

“Obesity in America is at a critical juncture. Obesity rates are unacceptably high, and the disparities in rates are profoundly troubling,” Jeffrey Levi, executive director of Trust for America’s Health, said in a release. “We need to intensify prevention efforts starting in early childhood, and do a better job of implementing effective policies and programs in all communities – so every American has the greatest opportunity to have a healthy weight and live a healthy life.”

The annual report, titled "The State of Obesity: Better Policies for a Healthier America," was formerly known as "F as in Fat." Adults in the study are considered obese if their BMI is 30 or more.Children are graded on the curve, so to speak; a child is considered obese if his or her BMI is above the 95th percentile for children of the same age and sex.