U.S. measles cases highest in 2 decades; blamed mainly on Americans' foreign travel, but also on opting out of vaccination

In the wake of the highest number of measles outbreaks in the U.S. in the last 20 years, it is important to make sure you and your children are fully immunized, especially if you are traveling abroad.
"The current increase in measles cases is being driven by unvaccinated people, primarily U.S. residents, who got measles in other countries, brought the virus back to the U.S. and spread (it) to others in communities where many people are not vaccinated," Ann Schuchat, director of the Center for Immunizatons and Respiratory Diseases of the federal Centers for Disease Control and Prevention, said in a press release.
Measles is a virus and is one of the most contagious diseases known. It spreads through the air when an infected person coughs or sneezes and will infect 90 percent of those who are exposed if they are not protected. It starts with a fever, followed by a cough, runny nose and red eyes. Then a rash of tiny, red spots breaks out, which starts at the head and spreads to the rest of the body. It can lead to pneumonia, swelling of the brain and death. Of every 1,000 children who get the disease, one or two will die, the CDC says.
Kentucky requires measles immunizations for children in child care and school, with exemptions made only for medical or religious purposes.
The Kentucky Annual School Immunization Survey for Kindergarten and Sixth Grade reports that for the 2013-2014 school year: 148 kindergarten students (0.3 percent) and 228 sixth graders (0.4 percent) opted out of immunization under the medical exemption, while 359 kindergartners (0.6 percent) and 249 sixth graders (0.5 percent) opted out for religious reasons. 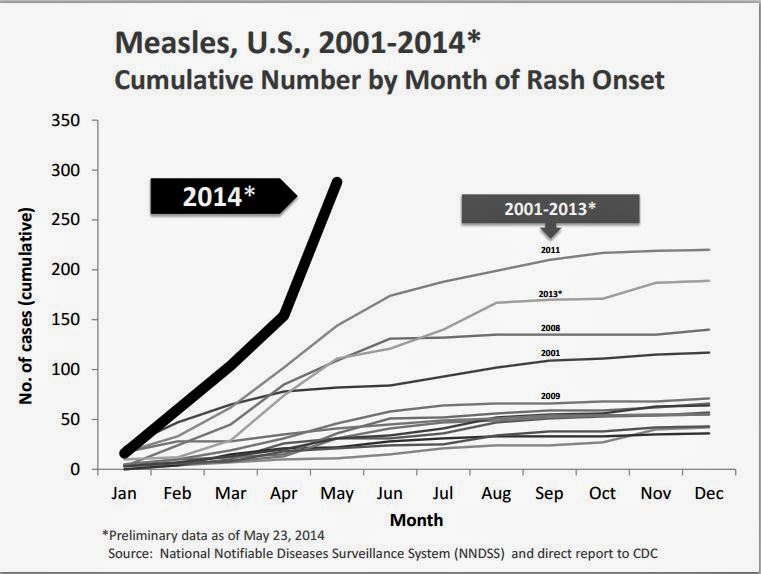 As of May 23, measles cases have been reported in 18 states and New York City, with most reported from Ohio (138), California (60), and New York City (26). Ninety percent have been among people who have not been vaccinated or have unknown vaccination status, according to the CDC. Most of the patients report religious, philosophical or personal reasons for avoiding vaccines. Through May 23, no deaths had been reported.
Posted by Anonymous at 10:27 AM
Email ThisBlogThis!Share to TwitterShare to FacebookShare to Pinterest
Labels: immunizations, measles, schools, vaccinations
Newer Post Older Post Home