More Kentuckians than ever are using preventive care services since the state expanded Medicaid on Jan. 1, reports FamiliesUSA, a lobby for federal health reform that included the expansion.

Recent data from the state Cabinet for Health and Family Services show a 37 percent increase in the use of preventive care services since 2013, report Andrea Callow, a Medicaid policy analyst and Katie Supko, a Medicaid intern for FamiliesUSA. Of particular note is that more Kentuckians are getting screened for diseases that kill so many of us. 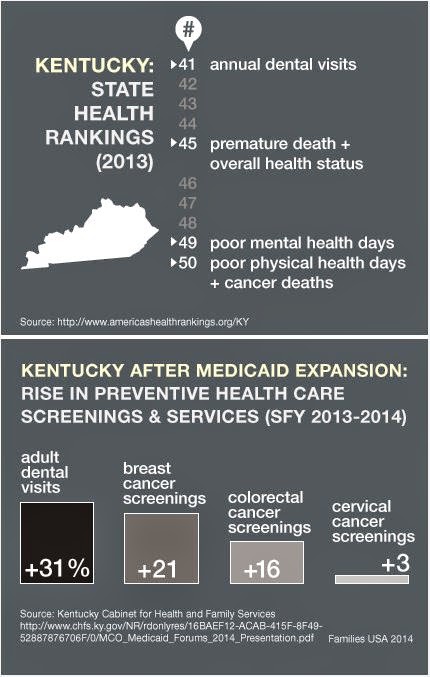 In 2013, Kentucky ranked first in cancer deaths and sixth in all premature deaths. It ranked 41st in annual dental visits and 45th in overall health status.

Screenings and check-ups allow medical providers to identify health issues before they advance, and improves the chance that treatment will be successful. For example, with early detection, the five-year survival rate for breast cancer, the leading cause of cancer death in women, is 90 percent, and the rate for cervical cancer is nearly 100 percent, the writers note. Screenings for colon cancer, the second leading cause of cancer deaths in the U.S., have a five-year survival rate higher than 90 percent if detected early, but only 40 percent of colon-cancer diagnoses are made during this early stage.
At least one study, over two years in Oregon, found no preventive health benefits from expanding Medicaid, but advocates say it will work in the long term. "Medicaid expansion makes preventive care possible," the authors write. "Kentucky’s decision to expand Medicaid will undoubtedly reap the state many benefits, from a drop in the uninsured rate to an increase in economic activity" by expanding health-care jobs. "But the access to critical preventive care services may be the benefit that gives Kentucky a much-needed boost in the health status of its residents."
Posted by Anonymous at 10:37 AM
Email ThisBlogThis!Share to TwitterShare to FacebookShare to Pinterest
Labels: cancer screening, dental care, Medicaid, Patient Protection and Affordable Care Act, prevention
Newer Post Older Post Home