Smoking increases risk of getting lung cancer by up to 20%, but add other carcinogens and it can go up as much as 300%

If you smoke, your risk of getting lung cancer is as much as 20 times greater than if you don't. But if you smoke and are exposed to other carcinogens such as radon, asbestos, arsenic or chromium, your risk could be 300 times greater, according to "a growing body of research, including two studies under way at the University of Kentucky," reports Laura Ungar of The Courier-Journal.

"The studies help explain why Kentucky’s lung-cancer and death rates are so much higher than for the rest of the nation," Ungar writes, citing experts. The state leads the nation in lung cancer, "and some Appalachian counties’ rates are more than double the national average. While Kentucky’s adult smoking rate of 28 percent is the highest in the nation, it’s not enough to account for the state’s sky-high lung-cancer rates."

Here are two possible causes: Appalachian counties are high in arsenic and chromium, and Central Kentucky has high potential for radon gas, which can accumulate under buildings. "The National Cancer Institute says radon by itself is the second-leading cause of lung cancer in the United States, and most radon-related deaths occur among smokers," Ungar notes. "Kentucky has no laws requiring radon testing for single- or multi-family homes, schools or businesses; and no laws mandating radon-resistant construction of new homes," according to Ellen Hahn, a UK professor of nursing and public health.

"While doctors aren’t sure how smoking interacts with such carcinogens in the body," Ungar writes, "some theorize that when smoking damages lung cells’ DNA, the lungs become more susceptible to damage from other toxins." (Read more) The map above is interactive on the Kentucky Cancer Registry website. Here's an example of how to display county data, which also shows the beginning of the county list ranked by lung-cancer rate; a map of county lung cancer death rates is also available: 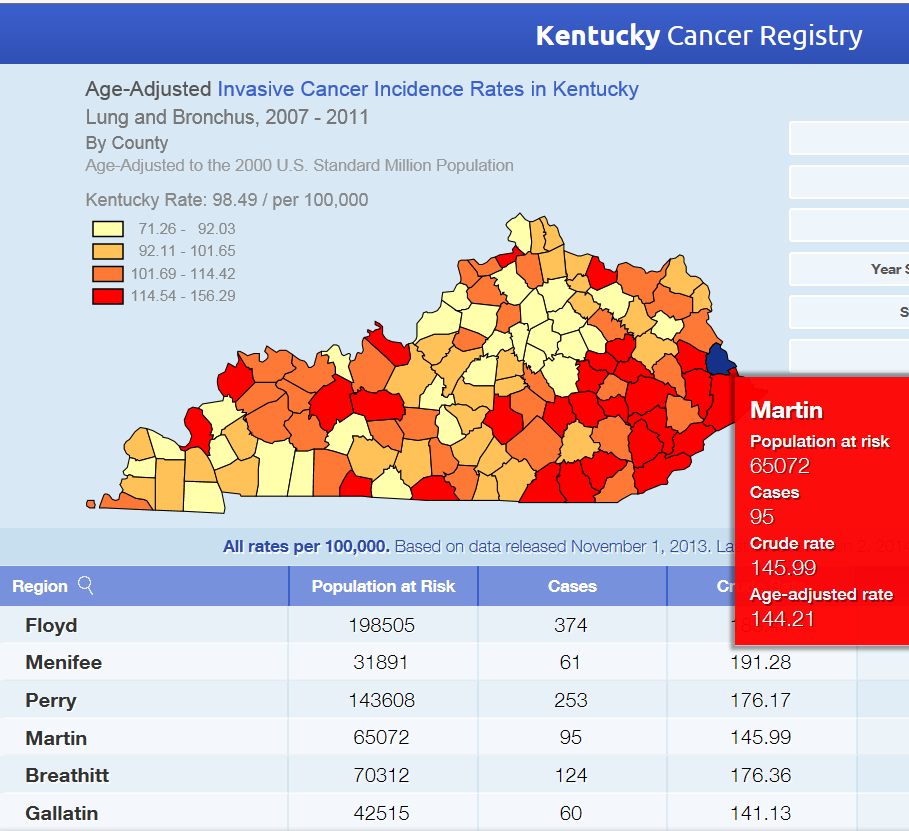