Kentucky ranks 39th in the country in funding programs that prevent kids from smoking and help smokers quit, according to a national report from a coalition of public-health organizations.

Kentucky ranks sixth in high-school smoking in the 2013 Centers for Disease Control and Prevention Youth Risk Behavior Surveillance System report, with 17.9 percent of high schoolers reporting they smoke cigarettes. Nationwide, the rate is 15.7 percent. The report challenges states to get their rates as low as Florida's 7.5 percent.

"If Kentucky reduced its high school smoking rate from 17.9 percent to 7.5 percent, it would prevent 148,150 kids from becoming adult smokers, saving 52,290 lives and $2.6 billion in future health care costs," the Campaign for Tobacco-Free Kids says in a press release.

The campaign says it's not that the state lacks the money to spend on such programs. 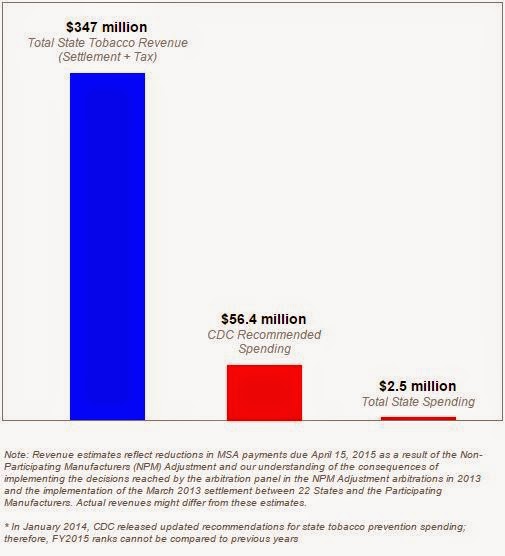 "Kentucky will collect $347.3 million in revenue this year from the 1998 tobacco settlement and tobacco taxes but will spend only 0.7 percent of the money on tobacco-prevention programs," says the release. "Kentucky spends $2.5 million per year on tobacco prevention and cessation programs, which is 4.4 percent of the $56.4 million recommended by the Centers for Disease Control and Prevention."

Soon after the settlement, the Kentucky General Assembly decided to spend half the settlement on diversifying and improving the state's agricultural economy, with the rest going to health, early-childhood development and other programs. The legislature later began using the fund for water and sewer projects in rural areas.

Kentucky is not alone in scrimping on such programs. Collectively, states have budgeted just 14.8 percent of the $3.3 billion the CDC recommends. States will collect $25.6 billion this year from the tobacco settlement and tobacco taxes but will spend only 1.9 percent of it ($490.4 million) on tobacco prevention programs, the campaign says.
Meanwhile, kids get plenty of tobacco-company marketing enticing them to smoke. "Tobacco companies spend $271.1 million per year to market their products in Kentucky – 109 times what the state spends on tobacco prevention," says the release.
The campaign says tobacco annually claims 8,900 Kentucky lives and costs the state $1.9 billion in health care bills. "Right now, Kentucky is also putting its children at risk and costing taxpayers money by failing to properly fund tobacco prevention efforts that are proven to save lives and health care dollars," says Matthew Myers, president of the campaign for Tobacco-Free Kids. "We need elected leaders in Kentucky to enact a comprehensive smoke-free law and increase funding for proven tobacco-prevention programs,"

The report is titled "Broken Promises to Our Children: A State-by-State Look at the 1998 State Tobacco Settlement 16 Years Later." It was also released by the American Heart Association, the American Cancer Society Cancer Action Network, the American Lung Association, the Robert Wood Johnson Foundation and Americans for Nonsmokers' Rights.
Posted by Anonymous at 6:53 AM
Email ThisBlogThis!Share to TwitterShare to FacebookShare to Pinterest
Labels: Centers for Disease Control and Prevention, federal regulation, smoking cessation, teens, tobacco
Newer Post Older Post Home